The power and relevance of the blend of liberal arts education and preprofessional training that are at the heart of a Marist education are essential to solving society’s most pressing problems, President Kevin Weinman said during his inauguration address Sept. 23. Weinman was formally installed as Marist College’s fifth president during an inauguration ceremony on the Campus Green, nearly one full year after he took office.

"As you know, there is much debate about the continuing value of the liberal arts compared to a form of education that focuses on professional training. I don’t understand this. In fact, I see no debate here at all," he said. "The debate between the relative merits of a liberal arts education versus professional education presumes that we must choose one or the other. We don’t. Not only can they co-exist, they are mutually reinforcing. This is especially true at Marist College. Here, we aspire to and, not or."

Weinman also stressed the need for Marist to continue to innovate and to evolve. "Complacency is not a strategy. As important as a continuing commitment to the liberal arts is, we also need to do two things to succeed as we move forward: First, innovate, and innovate relentlessly. And second, make Marist’s form of education available and accessible to any student who has the talent and drive to succeed here."

Weinman’s remarks included a direct message to Marist students. "You are why I am here. You inspire me each and every day. It will be my never-ending mission to help you get the most out of your Marist experience." 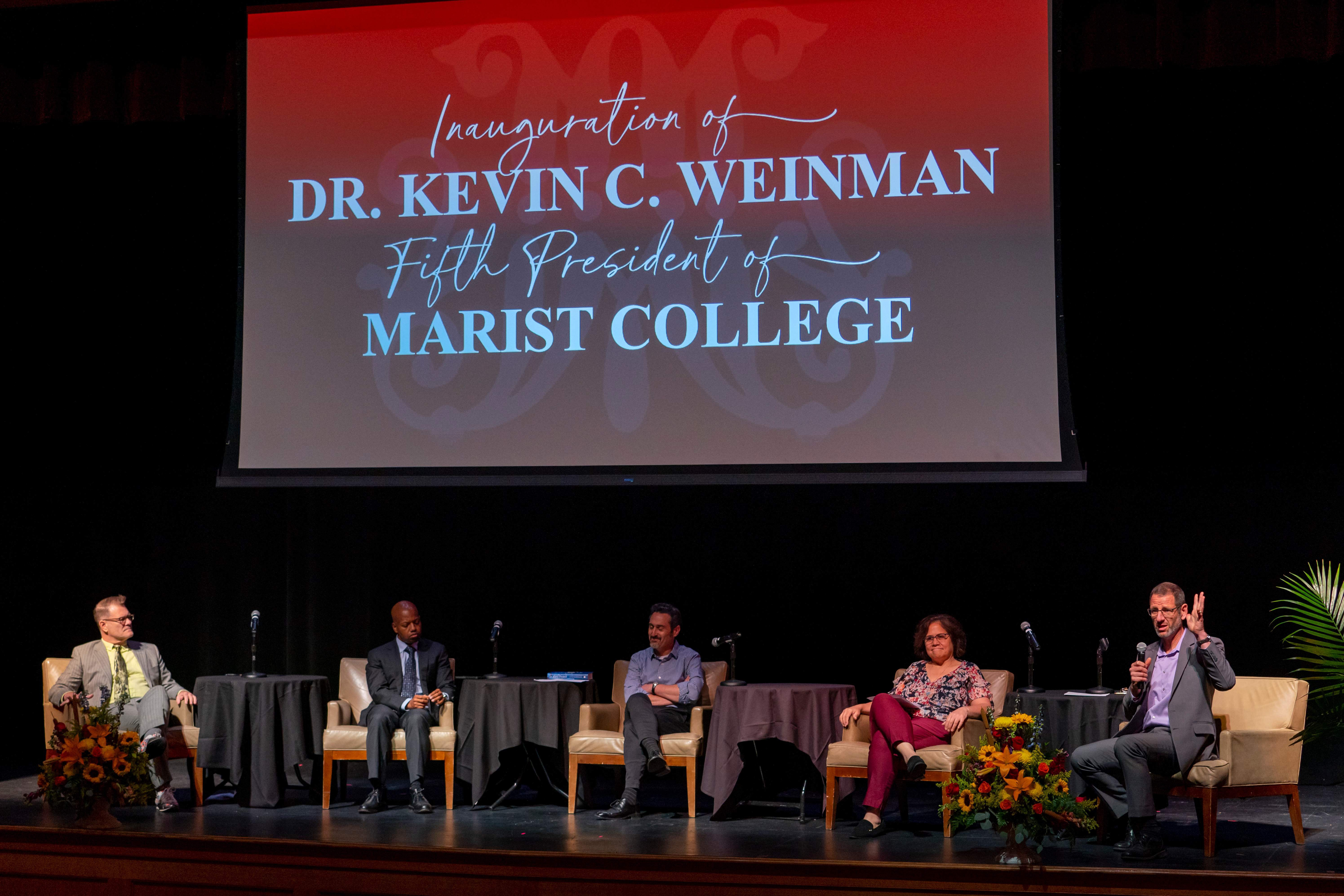 An image of Marist professors at the Academic Symposium, a part of the inauguration's "Celebration of Marist's Academics.” Photo: Carlo de Jesus/Marist College

"Kevin’s forms of expertise are so wide-ranging, certainly in finance, in computation and data-driven analysis, but he combines those with an appreciation of the imaginative arts, and the rigorous reading and analytic methods of the humanities. That is what students, and the rest of the world, need. All of that," Martin said. "In addition to his other qualities, you will find Kevin’s steadiness and his positive outlook make him an ideal person to lead. Kevin is truly a connector of fields, professions, opportunities, and people. What we see here today is evidence of that."

During the Friday afternoon ceremony, Ross Mauri '80, chair of Marist’s Board of Trustees, announced that every member of the Board of Trustees made a contribution to the Presidential Fund for Equity in the Marist Experience in Weinman’s honor. Shortly after his arrival at Marist, Weinman and his wife, Beth, announced a pledge to establish the fund which helps to remove financial barriers for talented students so they can pursue high-impact experiences that are often unattainable, such as internships, study abroad, and transitional support during their freshman year.

"When Kevin told me about his family’s support for our students, the ways in which his fund would enable Marist students to participate in internships and study abroad experiences and to access tutoring services that may have otherwise remained out of reach, I thought to myself, this is a remarkable commitment, and a true demonstration of what we mean when we talk about living our values," Mauri said. "I hope you receive this as a demonstration of the collective support of the board for your vision, your ambition, and your leadership. I hope others in our community will be similarly inspired to support our students."

"Dr. Weinman’s first meeting on his very first day was with the student government. That fact alone should tell you a lot about how much he values the students at Marist," Borbon said. "In one short year, he has shown that he is dedicated to helping students develop the intellect, character, and skills required for enlightened, ethical, and productive lives. I think the Marist community can rest assured that the future of Marist College is bright and that there are even better days to come."

Weinman’s family played key roles in the ceremony, with wife Beth and son Alex delivering remarks and daughter Brooke performing River Flows in You by Yiruma on the piano.

"I have known Kevin for over 28 years now. Throughout this time, he has always worked hard and dedicated himself to making the lives of those around him better, but I have never seen him so excited about an opportunity to make a difference as he is here at Marist," Beth Weinman said. "Marist, you are getting someone who does not do anything halfway, who tries to be everywhere all the time, and who cares deeply for everyone he’s around."

The event also included remarks by faculty and alumni representatives, an academic procession featuring Marist faculty and delegates from colleges and universities across the country, and musical performances from the Marist College Music Department. Delegates included representatives from each of Weinman’s degree-granting institutions, including the University of New Hampshire, where he earned his PhD.

The installation ceremony on Friday was preceded by a Thursday night open house at the Steel Plant Studios featuring the work of faculty, students, and alumni from the Art Department and Fashion Program. Friday morning included installations of student and alumni research and creative activity, an academic symposium featuring Marist faculty and "snap talks" featuring select faculty presenting research. After the inauguration, a campus-wide celebratory event for students, staff, and faculty took place on the Champagnat Green.