More than 250 alumni and friends along with their families got an exclusive look inside the evolution of the best-selling book series “Diary of a Wimpy Kid” thanks to the generosity of Marist alumna Julie Cullinane Kinney ’90 and her husband, Jeff, the creator of the series.

In a virtual presentation Oct. 15, Julie and Jeff shared the origins of the 16-book cartoon series featuring hapless middle-schooler Greg Heffley that has become an international sensation. The ticket price to the Marist-only event included a signed copy of Jeff’s newest book, Big Shot, published in October. All proceeds from the event, organized by the Marist Alumni Relations Office, benefited the Marist Alumni Legacy Scholarship Fund, raising more than $10,000. Special thanks go to Julie and Jeff for making the event possible. 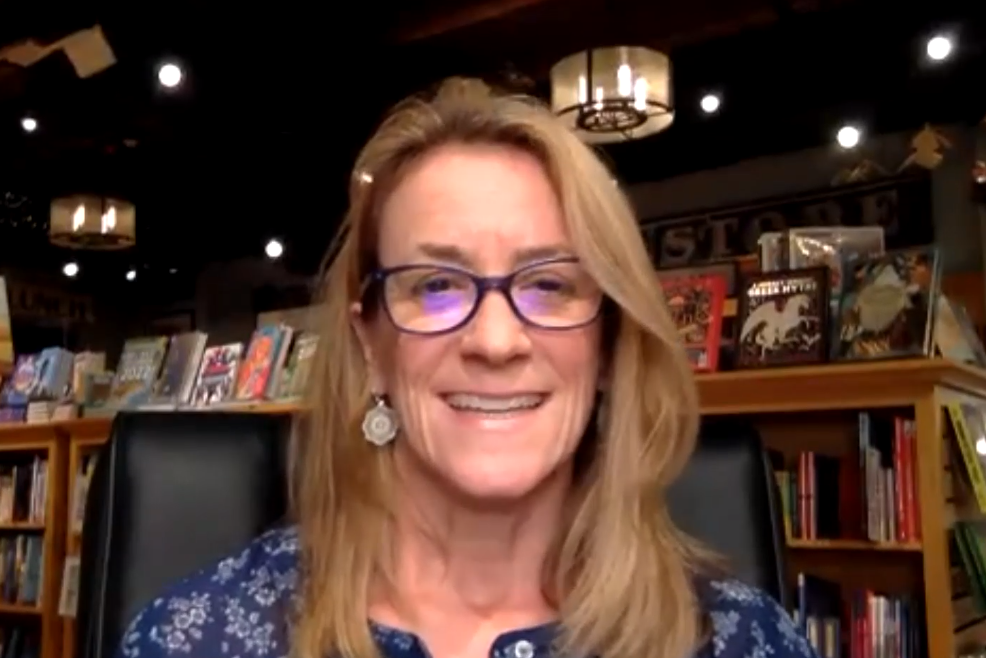 Julie interviewed Jeff about the evolution of the series Diary of a Wimpy Kid in a virtual program from their bookstore, An Unlikely Story, in Plainville, MA.

Since the first Wimpy Kid book made its debut in 2007, more than 250 million copies have been published in 79 editions in 65 languages. The Wimpy Kid series has been a constant on the USA Today, Wall Street Journal, and Publishers Weekly best-seller lists and has remained on the New York Times children’s series best-seller list for more than 657 weeks. The series has won a number of regional and national awards including two Children’s Choice Book Awards and six Nickelodeon Kids’ Choice Awards for Favorite Book. Jeff Kinney was named one of Time magazine’s most influential people and is also the creator of Poptropica, named one of Time’s 50 Best Websites. The Disney+ movie Diary of a Wimpy Kid premiered in early December.

Jeff and Julie took part in the Zoom program from their bookstore, An Unlikely Story, in Plainville, MA. Julie, a communications major in college and a former reporter and editor for a Massachusetts newspaper, interviewed Jeff for the Marist audience. She noted it was the first time she had interviewed him live for a virtual event. Then Jeff took live questions and gave a tour of his studio on the top floor of the bookstore, where his awards are on view.

Jeff, a graduate of the University of Maryland, had been developing the book for a year when he and Julie began dating in 1999. He kept a journal jammed with notes and sketches that captured not only memories from his youth but also some of the couple’s early dating experiences. He continued writing and drawing for the next seven years as they dated, married, and had two sons, and as he worked full time as a software programmer.

“It proves that you can do two things at once,” he noted, “that you can have your day job and pay your rent and you can also chase a rock-star dream in your spare time.”

His dream was to be a newspaper cartoonist like Charles Schulz, the creator of Charlie Brown and "Peanuts.” For three years Jeff tried to make it happen. But “nobody liked my stuff,” he said. Then he decided to try something different. He bought a ticket to Comic Con, a comic convention in New York City, planning to show his sample packet around to editors there. But the convention had oversold its tickets and sent everyone away. While on a bus tour of New York City just for kicks, Jeff noticed that Billy Joel was playing a sold-out concert at Madison Square Garden. He called Julie saying he wanted to stay overnight to go to the concert. A huge Billy Joel fan herself, she encouraged him to go for it. “Billy Joel was our thing at Marist in the ’80s,” she said.

He managed to get a ticket and went to the show. The next day, he was able to get into the Comic Con. An editor who saw his work said it was exactly what he was looking for.

“So it was thanks to Billy Joel that I got to be a published author,” Jeff said.

Throughout the presentation the Zoom chat room bubbled over with questions for Jeff. What inspired him to write the Wimpy Kid series?

“My own childhood,” he said. “I was reading Harry Potter at the time. I was like, “Man, this is really good writing, it’s a good story.” But I did think Harry was very, very different than I was as a kid. I did think there might be an appetite for a character who was not so perfect and not so heroic as Harry.”
He said his newest Wimpy Kid book, Big Shot, shows what it’s like to be in athletics but not be a star athlete. “I think it’s important that a kid can see himself.”

Earlier, he had elaborated on the appeal of his wimpy protagonist.

“Greg is a messy character. When kids read kids’ books, the character is usually aspirational. They’re heroic. Like think of Harry Potter, characters like that. They’re the hero that we want to be. And Greg isn’t, really. You know, books can be mirrors and windows, right? Windows, you see into another world. That’s Harry Potter. Mirrors are books where you see yourself. That’s Wimpy Kid. And I think a lot of kids are messy.”

“Ploopy was a nickname that my older sister came up with for me,” Jeff explained. “And for some reason, it just got me. It made me so mad, like it would make my ears turn red.”

He got over it, though.

“We’ve made our peace. And I’m making money off of her calling me ‘Ploopy.’ So I think I won that situation.”